The Institute for Development and Communication (IDC) is a premier autonomous research,
training and evaluation organisation of North-West of India.

The Gender Unit promotes gender justice with a three-pronged approach. The first pertains to increasing access to rights with efficient and effective governance. Second by building capacity of stakeholders to promote gender rights and third by uncovering the causal conditions leading to the practice of gender differentiation in a specific cultural context. The following is the nature of initiatives in IDC:

Specifically, the unit has worked on construction of contextualised masculinities in conflict and post-conflict situations. Evidence-based studies to uncover the dynamics of forms of gender violence have been undertaken on various themes like Atrocities Against Women, Female Deselection, Victims of Militancy and Caste-Based Violations. These studies have been undertaken for knowledge exchange and transfer at levels of policy construction, stakeholder mobilisation and community-based interactions. 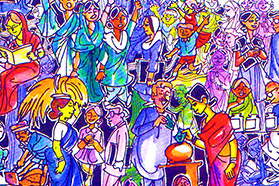