The Institute for Development and Communication (IDC) is a premier autonomous research,

training and evaluation organisation of North-West of India.

THE Institute for Development and Communication (IDC), Chandigarh conceptualised the idea of an institutionalised community policing programme in Punjab and proposed the same to the Government of Punjab in the late 1990s. This was a unique experiment implemented in post-terrorism phase in Punjab. The underlying idea was to motivate people to own a police station, the way they own a school, dispensary or community centre.

For this, police reforms were initiated from a police station rather than from above. There is an in-build inhibition in people to visit police stations. The mere idea of visiting a police station sounds fearful and makes them apprehensive. After a decade of research it was found that there is a spatial disconnect with the police station, howsoever modernised it may be. Hence this experiment.

The idea was conceived under the leadership of Dr. Pramod Kumar, Director, IDC, Chandigarh. In February, 2001, the Director IDC was engaged as a resource person and IDC as a resource agency through a Memorandum of Understanding on community policing by the Punjab Police under a framework of cooperation to develop an academic understanding of community policing with a regional approach. The outcome of this engagement resulted in the form of Community Policing Centres, and the Government of Punjab approved the setting up of District level Community Policing Resource Centres (CPRCs) vide its Memo No. 16/163/2002-4H(5)/415 dated 28.01.2003, and a detailed standing order was prepared and circulated to all the districts to establish Community Policing Resource Centres.

IDC’s efforts and advocacy prompted the State to provide the support of a statutory mandate to the CPRCs for its sustenance through a provision in Punjab Police Act, 2007, under Section 14. The Memorandum of Understanding with IDC was renewed in 2010 to provide the expert facility for the next five years vide DO No. 1200/R/ADGP/HRD & CP by the Director General of Police P.S. Gill, IPS.

Dr. Pramod Kumar, as a Chairperson of Punjab Governance Reforms Commission, further evolved community policing centres in a new format which ensured standardisation, self-sustenance, community participation and better outreach at the lower police administrative level and proposed the same to the government. Hence, on October 17, 2011, Government of Punjab decided to open community policing centres at lower administrative levels such as subdivisions and police stations named as Community Policing Suvidha Centres (CPSCs) at Sub-Division and Police Station Outreach Centres (PSOCs) at Police Station level. The Institute for Development and Communication (IDC) drafted a mandate to govern the formation, management and administration to provide uniformity and standardisation to these community policing centres and the programme was named as SAANJH.

‘Saanjh’ project is an institutionalised set up of management of 27 Community Police Resource Centres (District ‘Saanjh Kendras’), 114 Community Policing Suvidha Centres (Sub Division ‘Saanjh Kendras’) and 363 Police Station Outreach Centres (Police Station ‘Saanjh Kendras’) in the State. These Saanjh Kendras and Community Affairs Division (CAD) at Police Headquarters and 07 offices of Range DIGs are connected with a Central Server via the internet. A self-financed programme which functions as a society that ensures public participation, SAANJH has been lauded as an unique institutionalised community policing initiative by various national and international organisations. 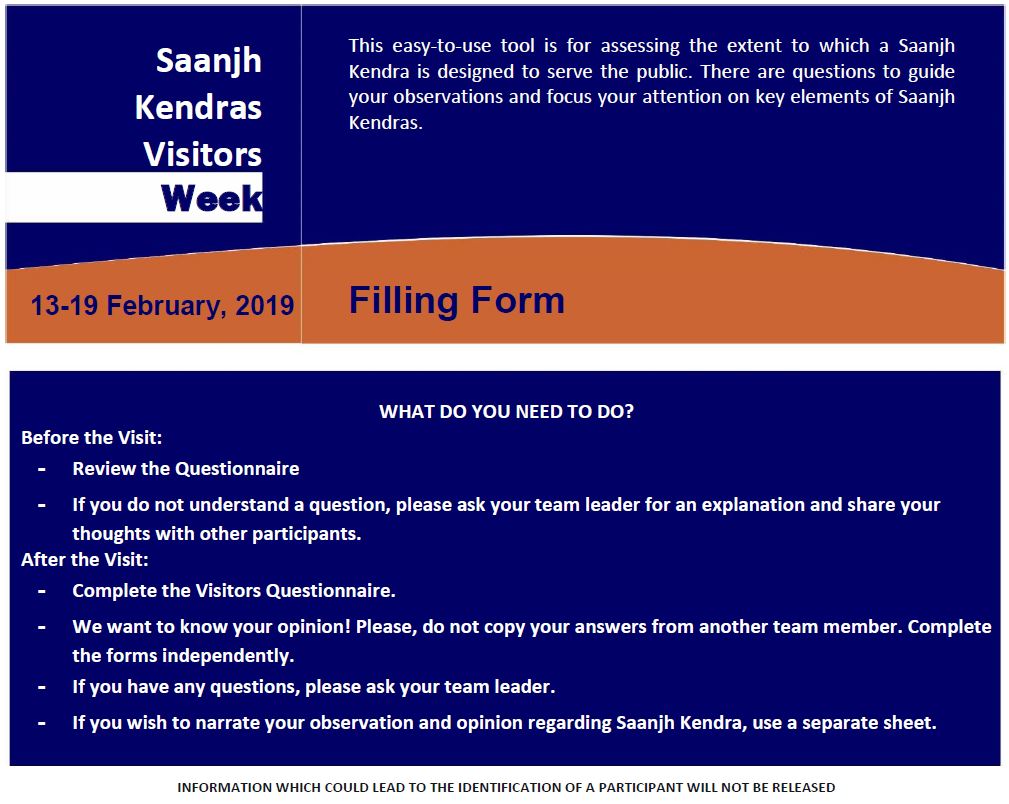 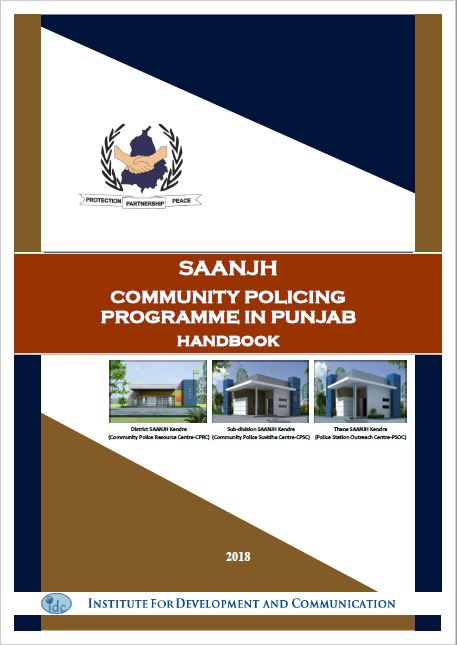 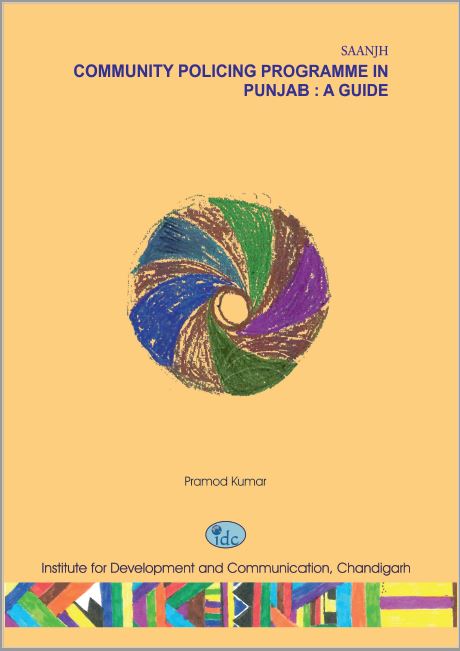 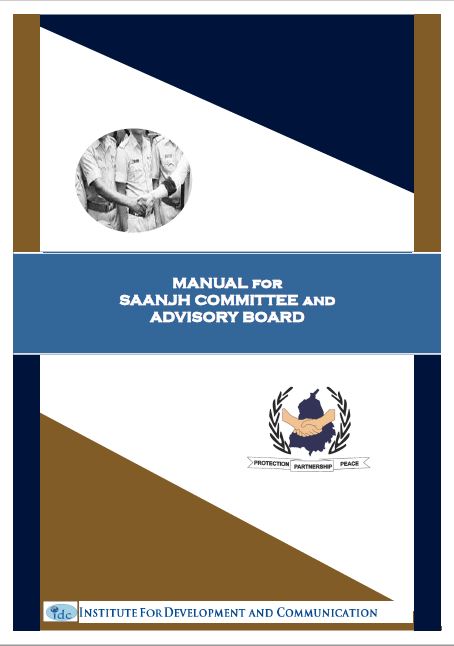 Manual for Saanjh Committee and Advisory Board 2016 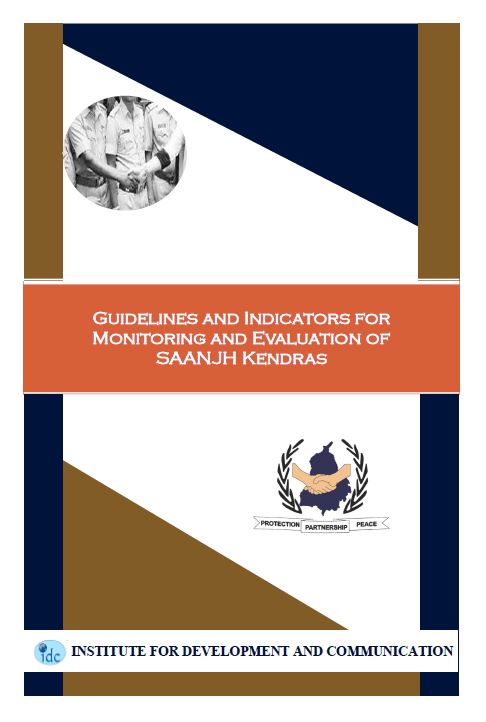 Guidelines and Indicators for Monitoring and Evaluation of Saanjh Kendras-2015 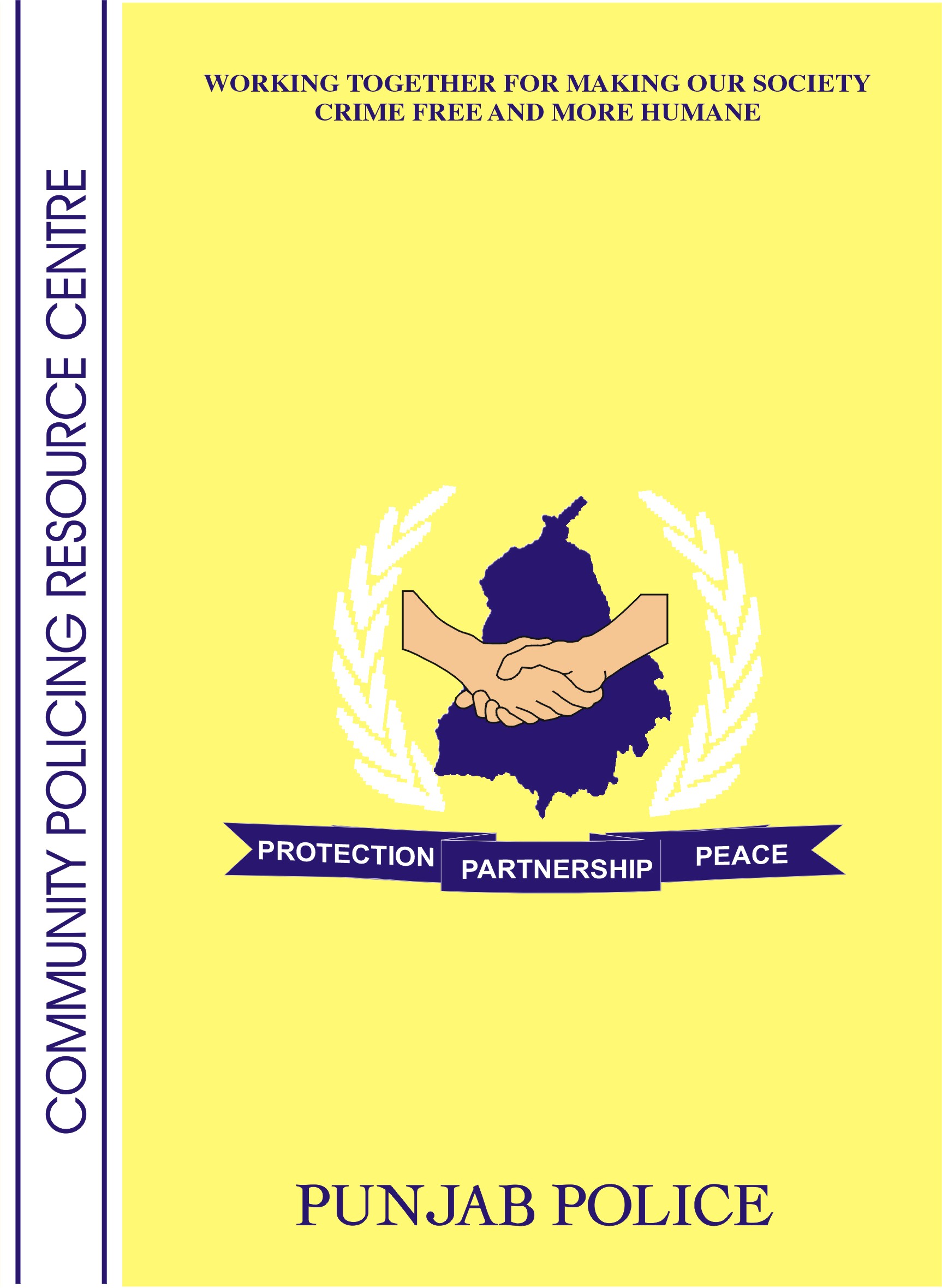 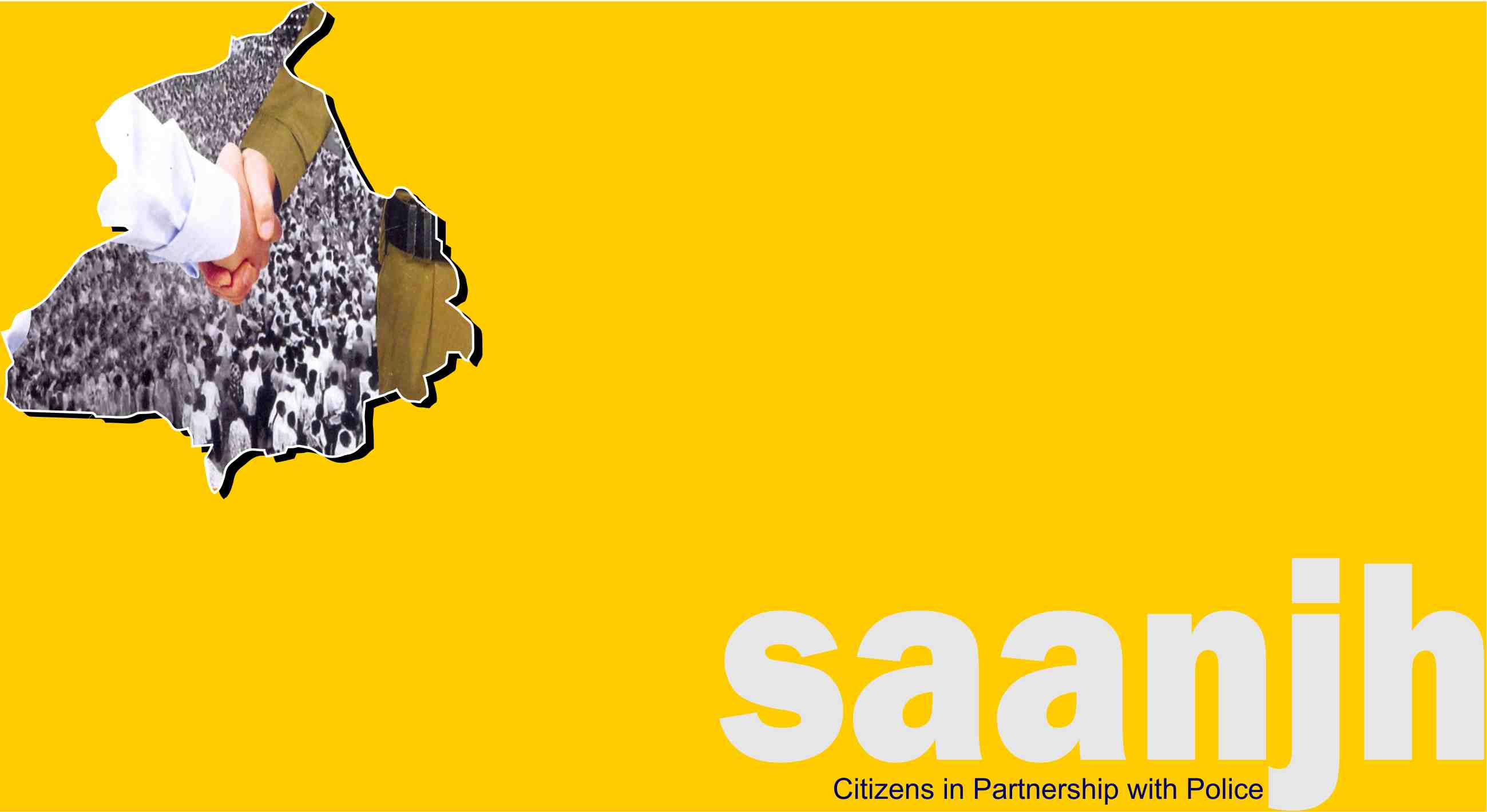 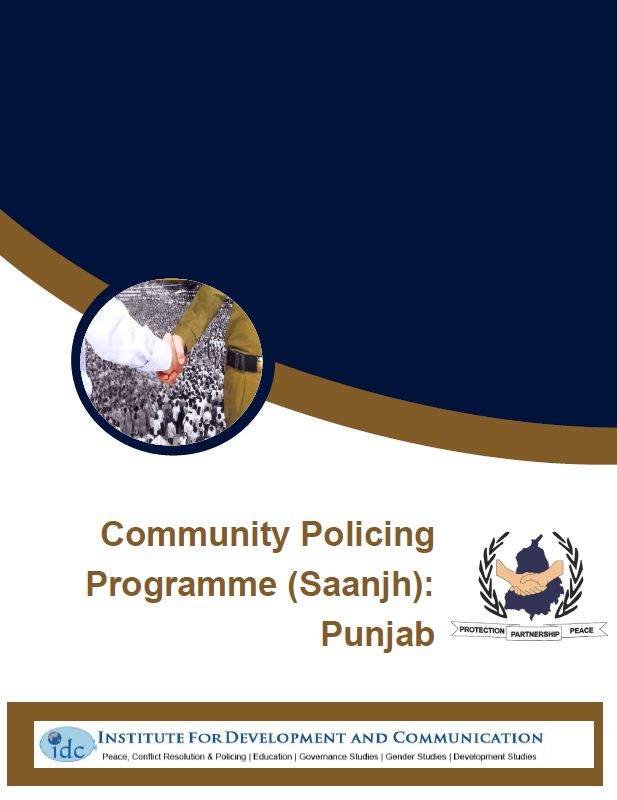 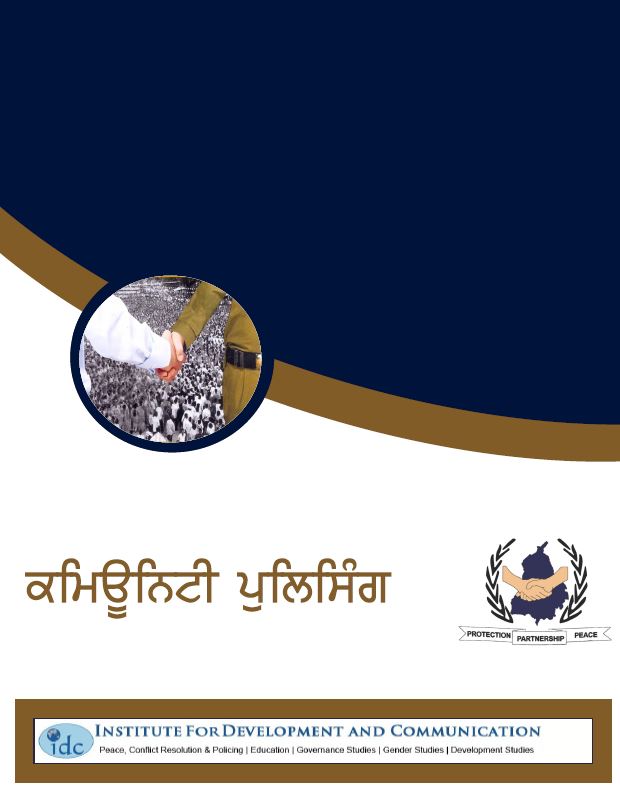 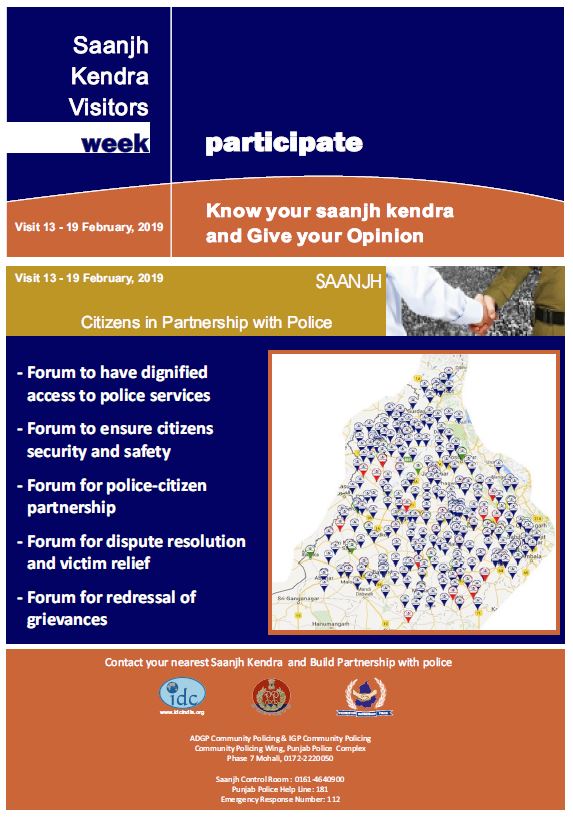 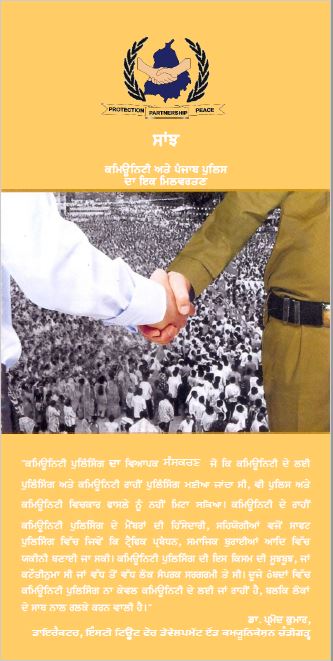 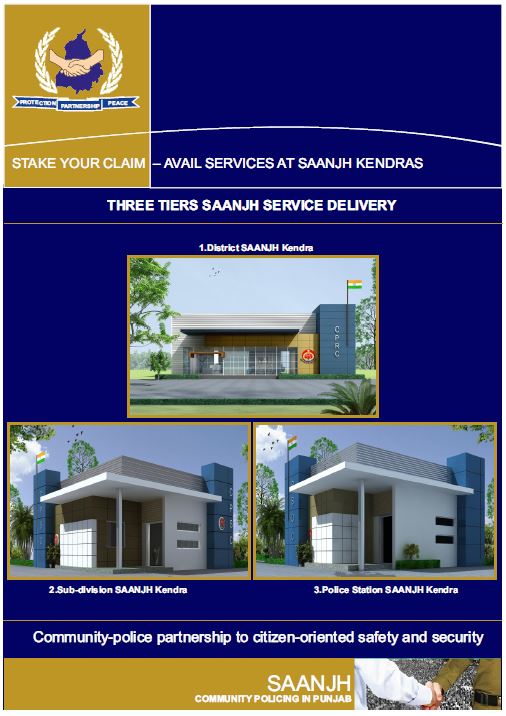 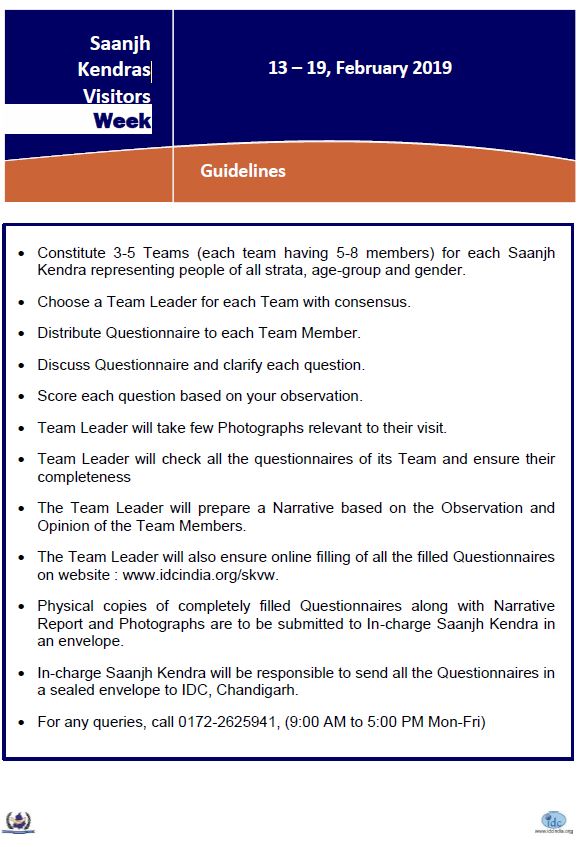 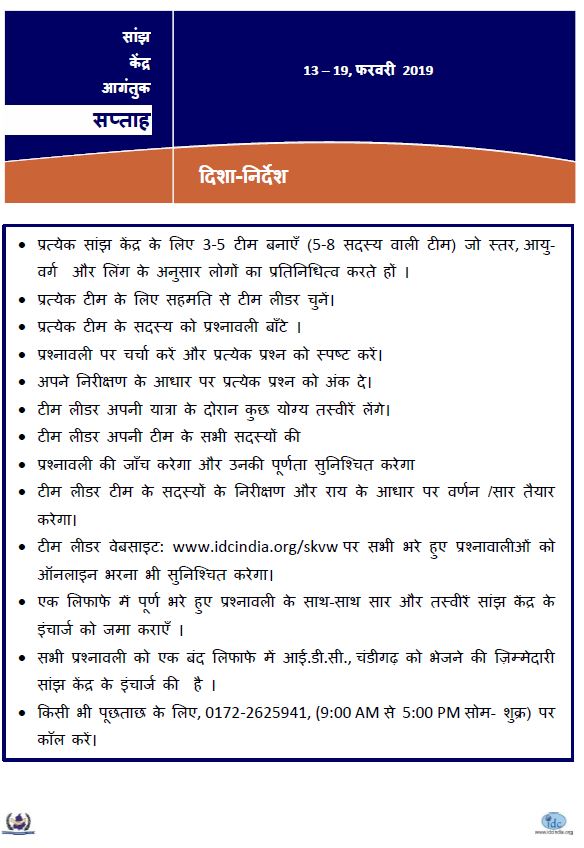 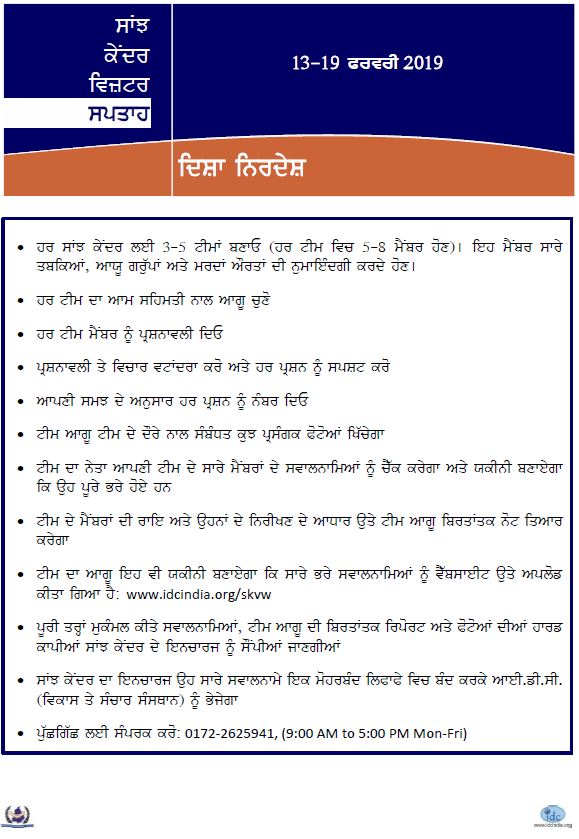 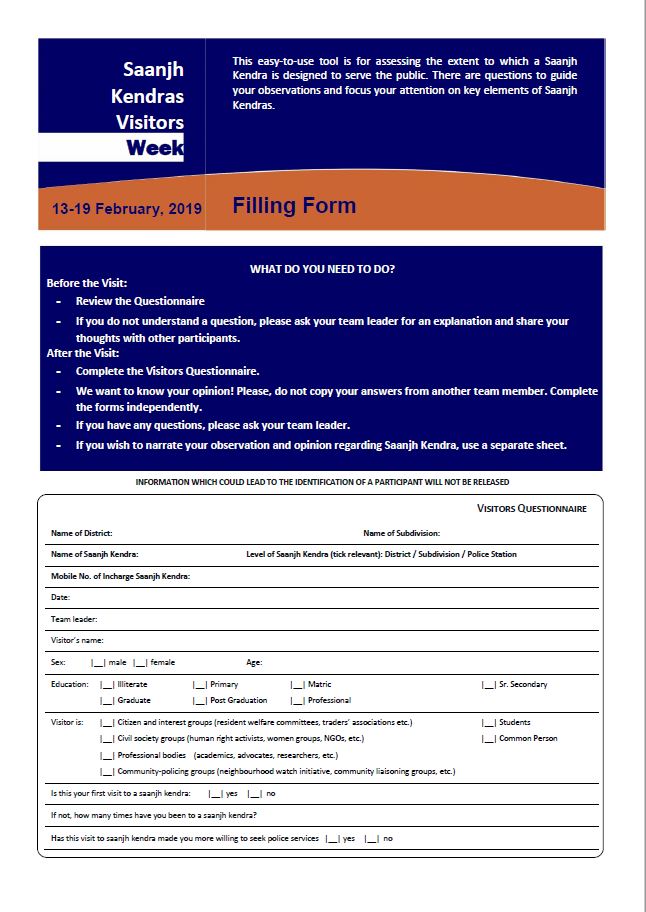 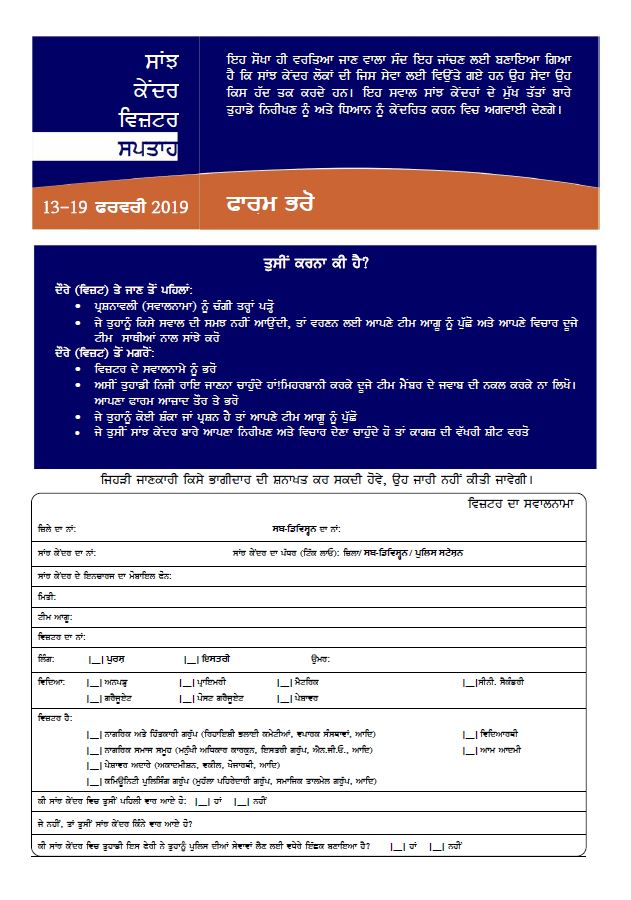 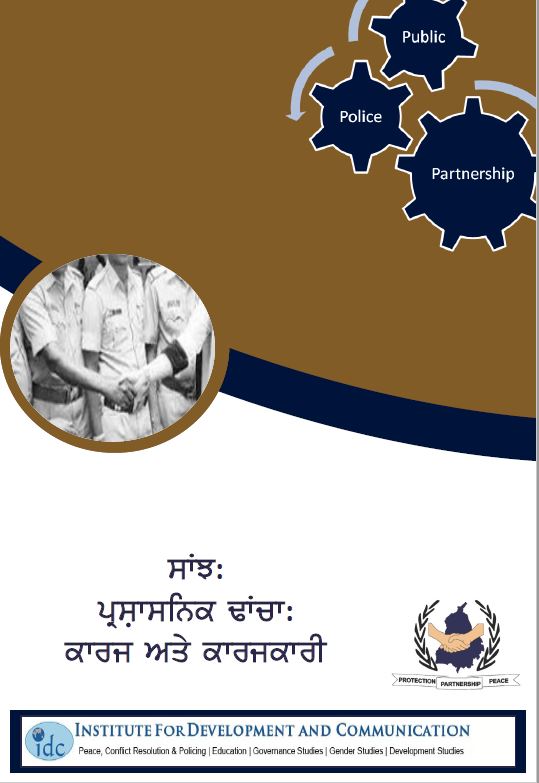 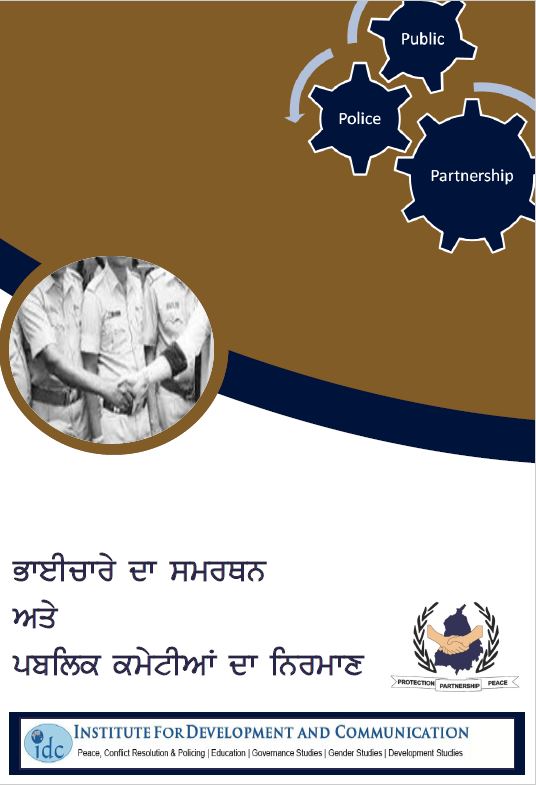 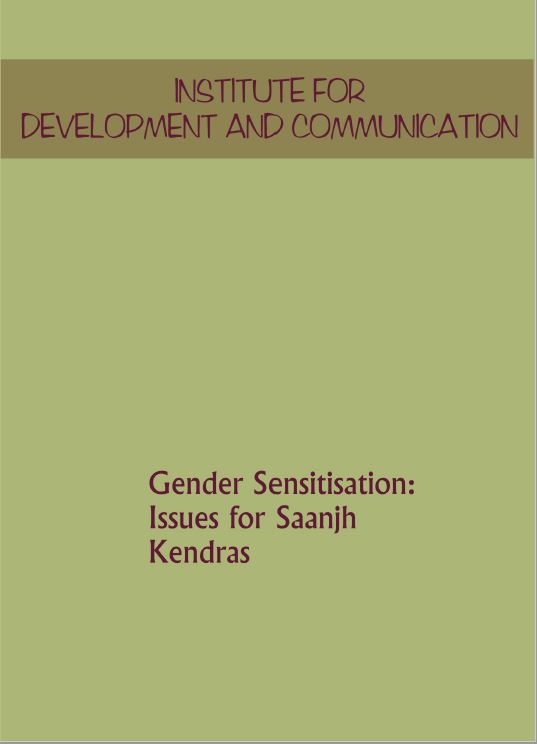 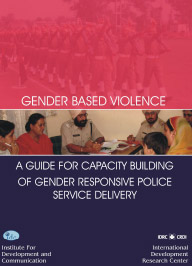 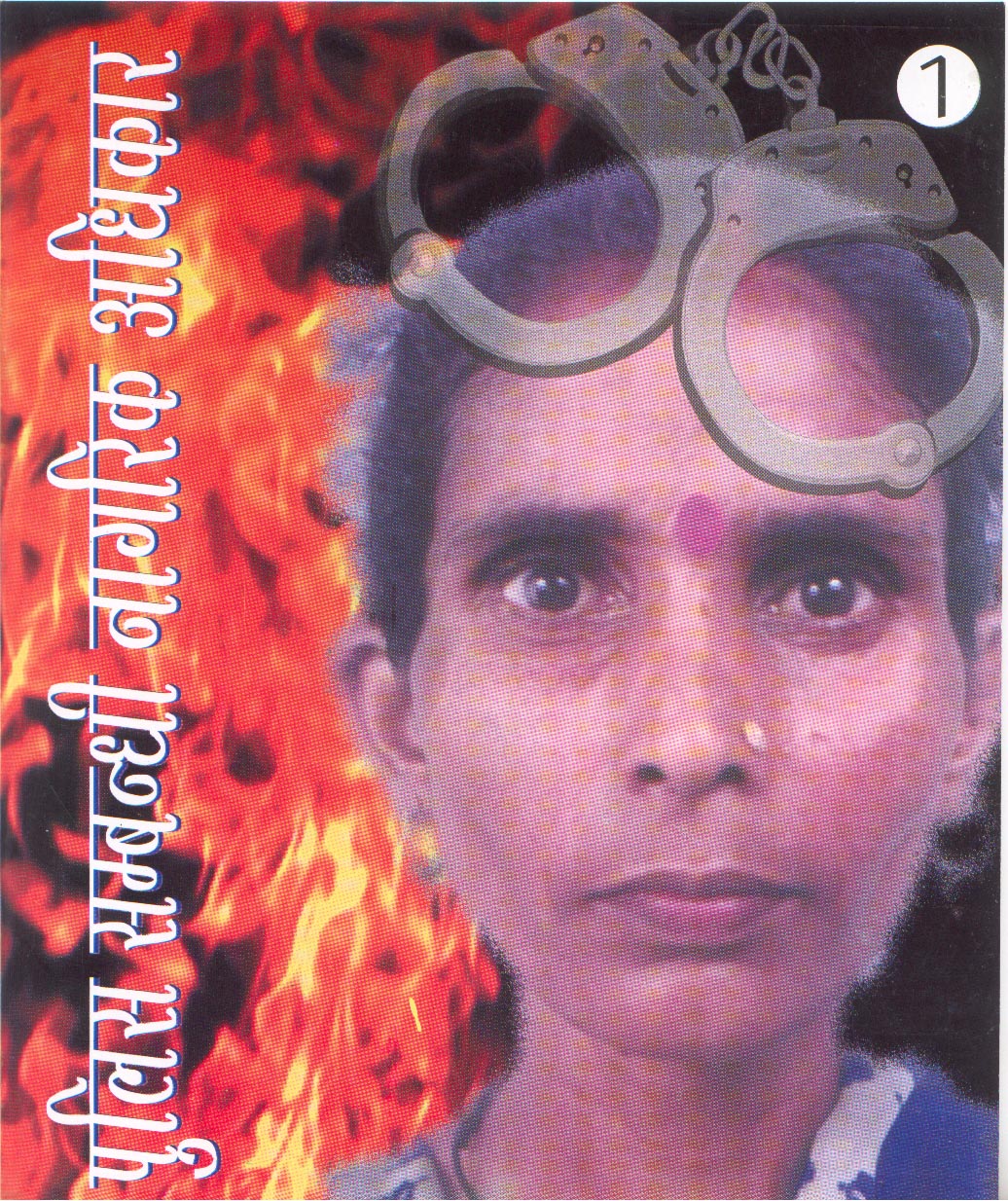